David grew up in the Los Gatos/Campbell area of Santa Clara County, California. He graduated from Campbell Union High School with the Class of 1956 and attended San Jose City College off and on from 1957 through 1963. After serving with the United States Army at both Fort Ord and in the post transportation office of the Presidio of San Francisco, David attend Humboldt State College, where he graduated in the spring of 1966 with a BS degree in Fisheries. he married Cynthia Jo Reynolds, in Arcata, Caliornia, on the 30th of January, 1965.  After accepting a job with was then Washington State Department of Fisheries (since merged with the then Washington State Department of Game), David and Cynthia moved to Olympia-Tumwater-Lacey area of Washington in September of 1966. After a 30 year career as a fisheries biologist and computer information consultant, David retired at the end of May in 1997. He has spent his retirement being gardener, cook, bottle washer, house cleaner, plumber, electrician and general jack of all trades. For recreation, David bowls two nights a week, meets for lunch and cards with four fellow retirees (monthly) and visit his brother Paul in Clovis (Fresno), California at least twice a year. In addition to genealogy, when David has time, he enjoys wood working, cooking Chinese food and movies (classics). He plays a little acoustical guitar and currently learning to pick a little instead of just playing three cords in at least one key on both a 6-string Yamaha and a 12-string Guild. While still able, David enjoyed traveling to visit his daughter, son-in-law and of course, grandchildren. Because of them he has been to the UK (London, Kent and Cambridgeshire ), Holland (Amsterdam), Germany, France (Strasbourg), Switzerland (Luzern), Denmark, Uganda (Jinja to Kampala, Kampala to Kisoro and points in-between), Kenya (Nairobi, Lake Nivashu and the Maasii Mara), Egypt(Cairo to Aswan), Zambia (Lusaka to Livingstone) and Malawii. He has driven in beautiful down town Boston (night, day, rain, shine, a little snow and 5 PM too). He has been to Newport Rhode Island, driven in Providence Rhode Island during 5 PM traffic, been to Burlington Vermont and stood by his great, great-grandfather's grave on the banks of the Erie Canal in Clyde, New York. He has seen Elephants, Lions, Zebras, Giraffes, Hippos, Crocodile and other assorted animals and birds living on the planes of the Serengeti and in the Great Rift Valley of Africa. Sailed the Nile from Luxor to Aswan and dined along its banks in the hart of Cairo. He has over looked the mighty Batoka Gorge of the Zambezi River at Taita Falcon Lodge and stood in the mist from Victoria Falls.  Watched the Ciclids of Lake Malawi swiming wild and free in their native habitat. None of this would have happened were it not for Beth and her family. 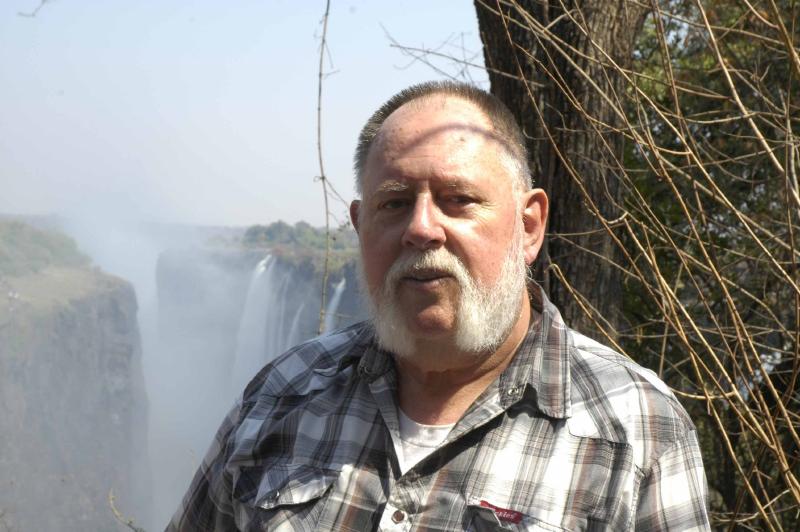 David at the Victoria on the Zambian Side
Primary Events
Where David was born, grew up, lived, worked and raised a family
Places Visited
Places I Have Been
Some of my iportant links