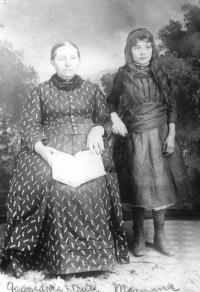 M, b. 7 August 1839
Valentin Ganz was born on 7 August 1839 at Durmersheim, Baden, Germany.2 He was the son of David Ganz and Bibiana Hansmann.2 Valentin married Theresia Rummel.1

M, b. 7 November 1839, d. 7 October 1873
Andrew Jackson Hayhurst was born on 7 November 1839 at Marion County, Virginia; Location given as Marion County West Virginia on find a grave.2 He married Bernetta Belle Middlebrook, daughter of Ibzan Middlebrook and Jane C. Crawford, circa 1855 at Karnes County, Texas.1,2 Andrew Jackson Hayhurst died on 7 October 1873 at Van Alstyne, Grayson County, Texas, at age 33; Burial: Van Alstyne Cemetery, Van Alstyne, Texas. The following is posted on Find A Grave "Andrew married Bernetta Belle Middlebrook abt 1855 in Karnes co.Tx. [marriage records burnt]. They had 8 known children. Story is told, there is stone for him but it is broken".2

"Among the leading citizens of Winters, no one enjoys wider esteem than does Mr. Reynolds, who, for the past eleven years has resided in that community, to the general progress of which he has contributed most generously. He was born November 17, 1839, near Platteville, Grant county, Wis., the son of Eldridge and Adaline (Perkins) Reynolds, natives of Kentucky. At the age of seven years he moved with his parents to Dubuque county, Iowa, crossing the Mississippi on a ferry boat propelled by tread horse power. During the succeeding seven years the father conducted a farm, his son assisting him out of school hours. In 1853, the family started for California with a wagon and four yoke of oxen, crossing the Missouri at Council Bluffs. All went well with them until they reached the Humboldt, where they lost most of their cattle by alkali water. Only one yoke was spared to them and they were compelled to leave their wagons on the summit of the Sierra Nevada mountains. Mr. Reynolds was able to proceed by doubling yokes with his brother-in-law, and they arrived at their destination after a journey of six months. Upon reaching Hangtown they established a modest home, remaining there for two and a half years, during which time Mr. Reynolds mined with considerable success. However, his gains of about $20,000 were rapidly expended in mining enterprises. The last shaft sunk showed better results than former ones, the dirt removed from the structure containing large quantitities of gold, $10 being secured in a few hours' work. Just before the arrival of the family in Hangtown the large oak tree some four feet in girth, known as "hang oak" was felled, and it was for this tree that the town was named. In 1856 the fater and son removed to the San Joaquin valley, where they farmed three hundred and twenty acres near french Camp, raising both wheat and barley.
At French Camp, in 1860, Mr. Reynolds was united in marriage with Miss Julia Burt, of Illinois, their union being blessed with two children. George Henry, of Stockton, and Maria A., the later deceased. Mr. Reynolds' second marriage united him with Miss Mary L. Brent, a native of Dubuque county, Iowa. She died near Winters in 1907, since which time Mr. Reynolds has resided in Winters with his adopted daughter, Pricilla Hall, now Mrs. Clarence Wyatt. Mr. Reynolds superintends his ranch, which he reaches by means of a run-about which he owns.
Upon settling in Yolo county in 1891, W. J. Reynolds bought a one-third interest in a valuable tract containing ninety-three and one-third acres, one mile from Winters, and later by purchase became sole owner. This property, which he leases on halves, comprises seven hundred and forty-eight apricot trees and seven thousand peach trees, his share form the 1912 crop having amounted to nearly $8000. The trees average twenty years in age and are in excellent condition.
For two terms Mr. Reynolds served efficiently as school trustee in Merced county, and as a Republican of broad and generous principles has always been deeply interested in political developments. For three years during the war he assisted in maintaing the state home guard ready for instant call, he at this time being a resident of San Joaquin count. Since coming to Yolo county he has devoted his time to horticulture, which he has found ver congenial, interesting and profitable. As a citizen of the highest worth he has ever enjoyed the commendation of his fellows." at Yolo County, California.6

M, b. before 1840
Karl Joseph Diesing was born before 1840 at Prussia.3 He married Florentina Schaffer before 1860 at Germany.4

Added at Find-A-Grave by Freida Karen
Col. William H. Winfield was born circa 1840.3,2 He appeared on the census of 15 July 1870 in A Hotel, Arcadia, Iron County, Missouri.4 He married Mary Lillian Tong, daughter of Hiram N Tong and Mary Ann Baird, on 15 May 1873 at Iron County, Missouri; Posted at Find-A-Grave by awmanthisgirl: "Found this little nugget of info in the "Weekly Perryville Union" newspaper (no longer in publication); May 30 1873 (Newspaper date); MARRIED, at the residence of Mrs. M. A. Tong, in Ironton, Mo., on the 15th of May 1873, Mr. William H. Winfield to Miss Lillie Tong. We wish the young married couple a pleasant and peaceful journey along life’s pathway".1 Col. William H. Winfield died on 1 October 1879; Burial: Ironton, Iron County, Missouri. Posted of Find-A-Grave.2,3

Children of Archibald Edmonston and Lucy (?)

Children of John Piel and Hannah (?)

Children of Netta (?) and Corbin Wilkes

Children of Amanda (?) and David Spivey

Children of Catherine (?) and Herman Brockman

Children of Charity (?) and Norman Passmore 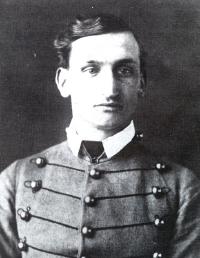 Posted on Finda A Grave by Stonewall
David Hillhouse Buel was born in 1840 at Maryland.1 He was the son of Rev Samuel Buel D.D. and Jane Eiza Wilmer.1 David Hillhouse Buel appeared as a West Point cadet in the barracks on the census of 20 June 1860 in West Point, Orange County, New York.3 He was recorded in the census of Rev Samuel Buel D.D. and Jane Eiza Wilmer on 27 August 1860 at Poughkeepsie, Dutchess County, New York.1 David Hillhouse Buel Commissioned an officer in the Regular Army 2nd Cavalry Regiment, attaining the rank of Brevet Lt. Colonel on the 13th of Marth 1865. on 24 June 1861 at New York.4 He married Josephine Maria McDougal on 28 September 1861 at Poughkeepsie, New York.2 David Hillhouse Buel died on 22 July 1870 "Killed instantly by shot from a Soldier who was being held in the Guard House under orders of Capt. Buel for a Misdemeanor".4 He Posted at Find-A-Grave: "Civil War Era Collection: "David H Buel, NY, 1st Cavalry
Transferred to Ordnance Nov'r 1861
Watervlier Arsenal Nov'r 1861
Promoted 1st Lieut Apr 1863
Promoted Captain 1864
Chf Ord Dept Tennessee 1864
Capt and Bvt Lt Col Comdg
Kennebec Arsenal"
Note in pencil [bottom right]:
"Asasinated [assasinated] at Leavenworth Arsl 1871."

Children of August A. Fromann and Johanna Herren

Children of Charles Pratt and Harriet (?)