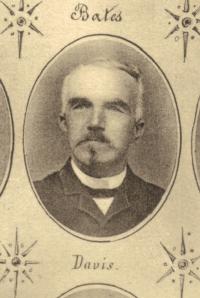 Posted on Find-A-Grave by Candy - 11/15/2010
Wilber Fisk Davis was born on 28 May 1831 at New Bern, Cravin County, North Carolina.1,2 He was the son of Joseph Hoomes Davis and Anne Turberville Beale.2,3 Wilber Fisk Davis married Ella Virginia Sampson.1 Wilber Fisk Davis died in 1931; From a bio posted on Find-A-Grave "Wilbur was born May 29, 1839, in Newborn, N. C. While yet at college he experienced a call to the ministry. This he put off, mainly through fear that the impression was occasioned only by the fact that his mother had dedicated him to the ministry from earliest infancy. The war intervened. He served in the army and spent some time as a prisoner in Fort Delaware. He taught school a number of years. He yielded to his call, and was licensed to preach November 5, 1876; took work under the Presiding Elder as pastor of Westmoreland Circuit the latter half of 1879, by request of the Quarterly Conference, after his father's death; and in February, 1885, at Floyd Street, Danville; entered the Virginia Conference in November, 1885, and has served four years at Martinsville; was ordained deacon in 1880, and elder in 1885. He has served Culpeper, Boydton, Williamsburg, Barton Heights, Cartersville, He is now, for the third year, the pastor of Westmoreland".1,2

Child of Mary A. McLauchlin and Dougal Monroe

This is a brief summary of Katherine Wurschmidt's father, as told to David Wurschmidt by Henry Bach on one of his visits to Chico(CA). Editing and correcting done by Christine Wurschmidt Licker, 6 Jul 2009. Corrections will be marked by an asterisk (*).

Nicholas Bach was born in Grosslangenfeld*, Rhineland Germany, on 20 August 1820. He was one of several children of Nicholas Bach and Elizabeth Cremer* of Grosslangenfeld. His parents are buried there. Nick had a brother,Bernard, who also came to the U.S.,married Lucy Keppers and settled in Stearns Co. Minnesota.* In 1853 he married a Miss Lewis (Elizabeth Lowen or Louen*) in Grosslangenfeld. Their first son, Michael, was born at Leutzkampen in the Eifel region of Rhineland, Germany, 22 Feb 1855. Sometime after Michael's birth, they left Germany and set out for America. They settled in Racine, Wisconsin. Here Nick worked at common labor. They must have been thrifty, because by the spring of 1857 he had acquired a team of oxen. Their second son, Peter was born during this time, in 1856 or 1857.

They departed for Minnesota where they squatted on 160 acres in the St. Cloud/Avon region of Stearns Co*. Squatting on unoccupied land was customary because no surveying had yet been done. Nick cleared a few acres of the land and built a cabin to live in and then with his team of oxen and a covered wagon engaged in hauling freight: probably for the Hudson Bay Company. His farm was located on the main road from St. Paul to Georgetown,MN which was the southernmost outpost of the Hudson Bay Company. In the spring, after hay for the stock was planted, he would set out for St. Paul, a distance of 50 miles, and load up for the trip north. Then, together with a caravan of freight wagons, escorted by a company of U.S. Cavalry soldiers, the procession would proceed past his home and on to Georgetown on the Red River in Minnesota. There were as yet no boats hauling freight on the Red River. These trips kept him away from his family for at least three months at a time. During this period, three more children were born to Nick and Elizabeth: Bernard (Barney), Margarite (Maggie) and Mattias (Mat).

About 1870 the Catholic Church obtained a grant for the land he was on in order to build a college. They offered him 160 acres in exchange, located at the town of New Munich (Stearns Co), which he accepted. [Note: I have been in contact with the archivist at what is now called Saint John's University. Apparently no records remain which would confirm or deny this story, but more research should be done through the Stearns County property rolls.] The family moved to the new location, but in 1871 his wife, (the first Elizabeth), died leaving him with 5 children.

Two years later, in 1873, he married a young widow with three daughters whose names were Louisa, Marie and Minnie (Philomine) Gnaden. His new wife, was Elizabeth Gnaden*. She was born in Alpthal* Switzerland, and her family name was Tschimperle*. She came with her parents to St. Paul, Minnesota along with two sisters and two brothers. Her siblings were Frank, August, Caroline and Philomine.

Caroline was married to Joseph Kaley, also from Switzerland. They lived in Lake Minnetonka (Carver Co?). They had 11 children by 1880, when they lived in Laketown Minnesota.

Philomine was married to Charles Finken--born Switzerland, 1850. They lived in Oak Township, Stearns Co, MN. In 1880 they had 4 sons and 2 daughters.

Elizabeth Tschimperle's first husband was a Mr.Gnaden, who had been a brewer, or possibly a builder of breweries. He died young, in 1870, leaving his wife with three daughters. Three years later she met and married Nicholas Bach. She said she "jumped out of the frying pan and into the fire." Their children are: Henry Bach b. New Munich 18 Aug 1876; Elizabeth (Lizzie) b. North Dakota Terr. 1878; and Katherine (Grandma Kate) b. Grand Forks, North Dakota Terr. 27 Sep 1880. The family moved to Grand Forks N.D. in 1877. Henry married Rose Catini and moved to a homestead in New Berg N.D. in 1903. Henry's childen: Roy, Walter, Liman(?-not legible), Marie, Arnold and Lloyd. Lizzie was married and spent her life in Canada-possibly Manitoba. Katherine married Cornelius Wurschmidt and had the following children: Leopold Cornelius, 13 Dec 1900; William David, 15 Nov 1903; Melwyn Henry, 28 Sep 1911; Conrad Vernon, 8 Nov 1913; Ione Louise, 16 Jun 1915; Gervis Neal, 20 Jan 1922.3

Children of John Thomas and Anne (?) 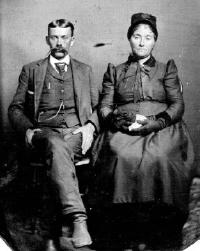 Children of James Forth and Sarah (?)

Children of Eliab B. Cantrell and Artelia (?)

M, b. circa 1832, d. between 15 July 1863 and 1865
Henry Vanaman was born circa 1832 at Ohio.1 He was the son of (?) Vanaman. Henry Vanaman married Hulda Charlotte Yocam, daughter of Simeon/Simon P Yocam and Armina Allen, on 20 July 1854 at Platte County, Missouri.1,2 Henry Vanaman and Hulda Charlotte Yocam appeared on the census of 4 August 1860 in Lee, Platte County, Missouri.1 Henry Vanaman Henry and Timothy Venaman were regostered in the 6th Congressional District in October 1863 at Lee, Platte County, Missouri.3 He Alonzo Yokum (Hulda's brother?) provided a letter the the U.S. Provost Marshals attesting to Henry Vennemans Union loality. In addition, Thers is a document indicating that Henry Venneman, 4 miles from Leavenworth, towards Platte City, in Platte Co. Mo. - July 7th 1863, had stolen by 5 men or more 1) big roan horse. 2) bay horse. 3) bay stud, 4) Sorrel horse. There was also a letter fropm James Price, Col, 39th Rt. satating the he believed that Henry Vanniman "is" entitled to his propery and that it should be delivered to him. on 15 July 1863.3 He died between 15 July 1863 and 1865 at Platte County, Missouri.4

Child of Dougal Monroe and Mary A. McLauchlin

M, b. 1832, d. 5 November 1863
Orrin Wooster Craig was born in 1832 at Genesee County, New York.1 He died on 5 November 1863 at Nashville, Davidson County, Tennessee; From an obituary posted at Find A Grave: "Orrin was a private in the Civil War. He was a blacksmith by trade and died of chronic diarrhea in Nashville, Tennessee.[1] He enlisted September 12, 1862 (Indianapolis), 87th Regiment, private (3 year service) – served October 1862 to April 1863 as regimental blacksmith. Was absent in June 1863, Manchester, Tennessee. By October, 1863, Orrin was ill and on November 5, 1863 he died of chronic diarrhea (typhoid fever). Physically, Orrin had blue eyes, 6'1:, fair complexion and light hair. He was born in Genesee County, New York and was 30 years of age when he entered the service". Burial: Nashville Nashville National Cemetery, Nashville, Tennessee.1,2