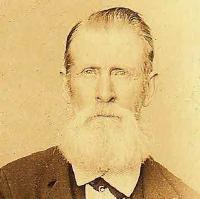 Posted on Find-A-Grave by S.W.
Francis Marion Whiteley was born on 30 September 1832 at Indiana.1 He married Cassandra Boone circa 1849 at Missouri.1,2 Francis Marion Whiteley died on 27 November 1905 at Milton, Umatilla County, Oregon, at age 73.1 He From a short biography posted at Find-A-Grave: "Frank was the son of John B. Whiteley & Elizabeth (Davis) Whiteley. He was born in Indiana, but as a young boy his family moved to Missouri. He married Cassandra Boone, who was the great granddaughter of the Famous Daniel Boone. As newlyweds, Frank & Cassandra came out from Missouri to North East Oregon by Ox drawn Wagon Train in about 1853. - They settled in Yamhill County, Oregon, and remained there until about 1874 when they moved to Whitman County, Washington. Francis and Cassandra moved to Adams Oregon about 1890. They had five sons and three daughters, as well as a child who died as an infant. Frank died at his home on the Walla Walla River near Milton, and is buried at the pioneer cemetery at Milton. His remains were later removed and reburied at the pioneer cemetery (possibly Gallaher Cemetery ) west of Adams, Oregon. (Information from HISTORY OF ADAMS, Volume 3, Pendleton Library) - Francis Marion Whiteley went by the nick name 'Frank', and for that reason some may have assumed his given name to be Franklin. In at least one record his name was entered as 'Franklin'. - According to a Umatilla, Adams, Oregon Census dated June 2, 1900, Francis Marion owned his home free of any mortgage at that time. His occupation was listed as Farm Laborer. It also stated that he could read, but he could not write. He had been married 50 years at the time of that census document".

M, b. 25 November 1832, d. 13 April 1915
Henderson Williford was born on 25 November 1832 at Fayetteville, Washington County, Arkansas.1,3 He was the son of David Williford and Mary Mallard.2 Henderson was included in the census of fanther and step mother, David and Rebecca Williford, on 4 December 1850 at Prairie, Washington County, Arkansas.4 Henderson Williford married Sarah A. Pegues, daughter of George Hicks Pegues and Elizabeth Spencer, circa 1855 at Texas.1,5 Henderson Williford and Sarah A. Pegues appeared on the census of 9 June 1860 in Precinct 4, Collin County, Texas; This census included David H. Williford, age 17, probably a brother.5 Henderson Williford and Sarah A. Pegues appeared on the census of 5 September 1870 in Plano P.O., Collin County, Texas.6 Henderson and Sarah also appeared on the census of 9 June 1880 in Justice Pricinct No. 5, Collen County, Texas.7 Henderson Williford married Mary R. (?) in 1885 at Texas.8 Henderson Williford died on 13 April 1915 at Sulphur, Murray County, Oklahoma, at age 82; From an obituary printed in the Plano Star Courier May 13, 1915. "When about 21 he came to Texas. He married Sarah Pegues Boyer 22 Apr.1855. He enlisted in Fitzhugh's regiment on 31 Mar. 1862 and served until the close of the war. He and Sarah had eleven children: Eliza Salmon, Enic (?Enoch), George, Henderson, David, Mary Gilliland, Julia Octavia Webb, James R., Lily Dickerson, Allie McDonald, and Norah Dickerson. An immense crowd assembled at the Murphy Cemetery to pay the last respect to the memory of one whose upright and godly life had honored that community for 49 years. His was a wonderful record of a quiet useful life".3 He Henderson was the son of David (b circa 1797,N.C) and Rebecca (b 1809, Va.) Williford who appear on the 1850 census in Prairie, Washington County, Arkansas. The 1850 census includes at least 9 children and what are probably 3 grandchildren.9 He According to the Plano Star Courier, Henderson and Sarah had 3 more childeren, Henderson, David and Mary. Mary was married to a Gilliland.10

Children of Henderson Williford and Sarah A. Pegues

M, b. December 1832
Chales (Karl) Wedlar was born in December 1832 at Germany.1 He married Ernestine Busch before 1859 at Germany.2 Chales (Karl) Wedlar emigrated in 1881.3 He was included in the census of Julius Emil Gomoll and Augusta Wedlar on 16 June 1900 at Fort Wayne, Allen County, Indiana; Charles Wedlar was listed as father-in-law on this census.4 Chales (Karl) Wedlar died in December 1905; From an obituary- "CARL WEDLER - Carl Wedler, a widower, 73 year old, died at the residence of his son-in-law, Julius Gomoll, 1428 Taylor street, at 12:45 o'clock last night. H was born in Germany and came to this country twent-four years ago. During life he was laborer. His wife died twenty-six years ago. Mr. Wedler is survived by four children ----- Herman Wedler, of Madison Ill; Gustave Wedler, of St. Louis; Mrs. Julius Gomoll, of this city, and Mrs. Otto Albrecht, of this city. The funeral will be held monday afternoon at 1:30 from the residence and at 2 o'clock from the Emmaus Lutheran church, the Rev. Wambsgauss officiating."5

Children of Zion Flanary and Phebe (?)

Children of Nancy A. (?) and William W. Richardson

M, b. circa 1833
John A. Dwelley was born circa 1833 at Maine.1 He was the son of Stephen Dwelley and Phebe Smith.1 John A. Dwelley was included in the census of his parents, Stephen and Phebe Dwelley, on 4 August 1850 at East Machias, Washington County, Maine.1 He married Dorcas F. Hatheway, daughter of Isreal Hatheway, circa 1857 at Maine.2 John and Dorcus Dwelly appeared on the census of 12 June 1860 in East Michias, Washington County, Maine.2

Children of John A. Dwelley and Dorcas F. Hatheway

F, b. circa 1833, d. 9 February 1895
Susannah M. Harrington was also known as Susan.2 She was born circa 1833.1 She was the daughter of Sylvanus Harrington and Jane Anderson.1 Susannah M. Harrington married Andrew Joseph Deitrick on 27 June 1849 at Beardstown, Cass County, Illinois.3 Susannah M. Harrington died on 9 February 1895 at Payette, Payette County, Idaho; From an Obitury posted on Find-A-Grave (21 Feb 1895, Leon, Decatur Co., Iowa): Susan Detrick was born Oct. 14, 1833 in Beardstown, Ill and while yet a child her parents moved to Fairfield, Iowa, but for some cause returned to Beardstown where at the age of sixteen she was married to A.J. Detrick, the date of marriage being June 27, 1849. Soon after the marriage they moved to Des Moines where her husband became a partner in a newspaper. While living there their first child, Charles was born and later she moved to their old home in Illinois where Phillip was born. Later they moved to Boonsboro, Iowa where they remained for several years and during the residence there Eliza, Nanna and Kate were born. They then moved to Kansas, but did not remain long and started to return to Des Moines but on arrival at Leon her husband being a printer, took a berth on the Pioneer newspaper.1,3

Children of Herman Brockman and Catherine (?)

F, b. circa 1833
Malvinia Downes was born circa 1833 at Kentucky.1 She married John Miller after 1 August 1850 at Kentucky; While she is listed as Luvina on the 1860 U.S. census, her maiden name was provided as Melvina Downs on the birth record for their son Dillard recorded in Powell County.1 Malvinia Downes and John Miller appeared on the census of 18 June 1860 in Stanton, Powell County, Kentucky.1

Children of Samuel L. Benjey and Elizabeth A. (?)

Child of Josiah R Greer and Nancy "Nannie" A White

F, b. circa 1833
Eleanor B. Bates was born circa 1833.1 She married Henry M Guyott, son of John Guyott and Rachel Mallery, on 14 February 1861 at Monterey, Allegan County, Michigan; They were married by Henry's father, John Guyot, Justice of the Peace. Their marriage was recorded May 31, 1862.1 Eleanor B. Bates and Henry M Guyott appeared on the census of 6 August 1870 in Hopkins, Allegan County, Michigan.2 They appeared on the census of 2 June 1880 in Monterey, Allegan County.3

Children of Eleanor B. Bates and Henry M Guyott

M, b. circa 1833, d. before 1866
George W Robinson was born circa 1833 at Tennessee.2 He married Margaret Frances Harrelson on 2 August 1853 at Jackson County, Missouri.1 George W Robinson appeared on the census of 21 July 1860 in Fort Osage, Jackson County, Missouri.2 He died before 1866 at Saline County, Arkansas; Captured and executed by Union Troops.1

Children of Frances (?) and Jno Humphries 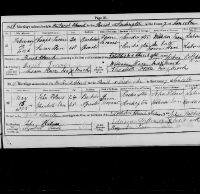 Children of Louis Gomoll and Minnie (?)

Children of Hannah (?) and Peter Einboden

M, b. 1833, d. 1881
James Burd Peale was born in 1833.1 He was the son of Rubens Peale and Eliza Burd Patterson 6 Dec 1795.2,3 James Burd Peale married Mary Clarissa McBurnie circa January 1860 at Pennsylvania.2 James Burd Peale married Mary Rebecca Frisby Wilmer, daughter of Simon Wilmer and Mary Eleanor McDaniel, after 1865 at Pennsylvania.1 James Burd Peale and Mary Rebecca Frisby Wilmer appeared on the census of 29 July 1870 in Philadelphia, Pennsylvania.4 Jame and Rebecca appeared on the census of 2 June 1880 in Philadelphia, Pensylvania.5 James Burd Peale died in 1881.1 He Posted at Find-A-Grave: "Dr. Peale was commissioned as Brigade Surgeon October 30, 1861. On December 2, by Special Order 318, he was assigned to Department of Potomac, to duty on General Stahel's staff, First Brigade, Blenker's Division. December 12, 1861, he went into winter quarters at Hunter's Chapel, Virginia, until March 10,1862"; "June 19th, General Siegel being in command, by Special Order No. 81, Department Shenandoah, Section TV., Brigade-Surgeon J. B. Peale was appointed Chief of Hospitals, to carry out the provisions contained in " Sections 2 and 6 of General Orders No. 36, Adjutant-General's Office, Washington, April 7, 1862." Dr. Peale was at the second battle of Bull Run, August 30, 1862. About December 7, 1862, by Special Order No. 132, Headquarters Eleventh Army Corps, he was assigned to duty at headquarters as Medical Inspector of the Corps, on which duty he remained until his resignation was accepted, April 29th, in consequence of ill health, caused by exposure during the winter".2