Children of Joseph Graham and Sarah (?)

F, b. circa 1847
Ellen McKay was born circa 1847 at Georgia.1 She was the daughter of Douglas McKay and "Eliza" Elizabeth Brady.2 Ellen McKay along with her sister Josephing, was included in her parents when she appeared on the census of her parents of 29 October 1850 in Sistrict 27, Sumter County, Georgia.2 She was included in the census of Douglas McKay and "Eliza" Elizabeth Brady on 29 October 1850 at District 27, Sumter County, Georgia.3 Ellen McKay married John A. Ansley circa 1866 at Georgia.4 Ellen McKay Ansley, a widow, appeared on the census of 22 June 1880 in Americus, Georgia; This census included Josephine McKay, age 30, single sister also a Mantua maker.1

Children of Ellen McKay and John A. Ansley

Children of Asa Brown and Sarah A. Price

Children of Mary "Marthy" A. Buel and Thomas Nobles

Children of Lucretia (?) and Soloman Noel

Children of Green (Greenberry) B. Wallen Jr and Rebecca Osborne

M, b. circa 1847
George McQuade was born circa 1847 at Australia.2 He was the son of Elizabeth (?)2 George McQuade married Louisa "Lulu" Yancey, daughter of Tryon M Yancey Jr. and Rosa B Crowell, on 16 January 1880 at Tuolumne County, California.1 George was included in the census of he mother Elizabeth (?) McQuade on 1 June 1880 at Sonora, Tuolumne County, Califronia.2

F, b. circa 1847, d. before 1889
Margaret (?) Margaret's sir name has been listed by others as either Wyatt or Clingean. Regardless, she was married to an unknowen Hodges before marring Cyrus. Note that Frankie Hodges was listed as Cyrus' step-son on the 1880 U.S. Censys for Schuyler county.2 She was born circa 1847 at Illinois.1 She married (?) Hodges circa 1870 at Illinois.1 Margaret (?) married Cyrus Henry Young, son of Milton Young and LaRue Jane Ober, before 1877 at Missouri.1 Margaret (?) and Cyrus Henry Young appeared on the census of 14 June 1880 in Glenwood, Schuyler County, Missouri.3,2 Margaret (?) died before 1889 at Missouri.3

Children of Cyrus Worth Ober and Emma Jane Raymond

Children of Sophronia (?) and Alex Salmon 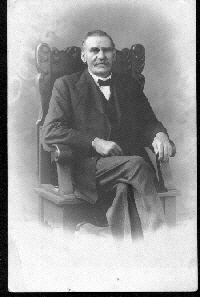 Uriah Hitite Pratt
Uriah Hitite Pratt was the son of William Pratt and Emma Pepper. He was later christened on 7 November 1847 at Wisbeach-St Peter; The baptismal record reads: Uriah Pratt, son of William Pratt lab and Emma Pepper single woman both of Timber Market ,Holbeach, Lincolnshire.1,2 He was recorded during the census of his parents, William and Emma Pratt, on 30 March 1851 at 181 Fleet Street, Holbeach, Lincolnshire.3 He was recorded with his parents on the New York state census at Galen, Wayne County, New York, in 1855.4 Although Uriah does not appear in the 1860 U.S. census. It is possible that he had left for Kent County, Michigan by then or, possibly he may have been the G(U). Platt listed as a 15 year old farm laborer living in the home of George P. Smith in Galen. The appearance and disappearance of Uriah from Wayne County and, subsequently, his marriage in Kent County Michigan in 1870 may mean that he was moving back and forth between his parents and his Uncle Uriah in Kent County, Michigan.5 He was recorded in his parents state census at Galen, New York, in 1865.6 Uriah must have gone to Kent county Michigan shortly after the 1865 state for he married Mary Ann Brown, daughter of Joseph F. Brown and Mary A. Hare, on 3 July 1870 at George Town, Michigan, solidifying the relationship of Uriah to his uncle Uriah who had settled in that area in the early 1850's; Their marriage was witnessed by Mary's next door neighbor's, Oscar and Naomi Lowing. J.R. Mergridge was the Justice of the Peace who married them.7,8 His relationship to Emma Pepper Pratt and his marriage to Mary Brown are confirmed that he and Mary Ann are listed in the deed of inheritance made by Emma Pepper to her living children on 20 April 1880 at Kent County, Michigan.9 His first wife Mary Ann had died of consumption in may of 1880, so Uriah was listed as a widower, with their three children for the census of 2 June 1880 in Walker Township, Kent County, Michigan; The 1880 census listed him as a farmer. the household also included a house keeper, Roxania Smith (age 64) born in New York.10 Uriah Pratt married Arminda Coon, daughter of Tobias M Coon and Eleanor "Ellen" Decoursey, on 18 May 1882 at Talmadge, Ottawa County, Michigan; They were married by Chauncey Baldwin, Justice of the Peace.11,10,12,13 While they manage to produced four children in just over four years, their marriage must have been a tumultuous one for Arminda filed for divorced on 18 September 1893 at Kent County, Michigan, citing drunkeness, assault, cruelty and adultery with an Olive Griswold (later to become Uriah third wife). Uriah countered on much the same grounds, citing assault, disgusting living habits and teaching their children to chew and smoke tobacco. There seems to be no evidence that their divorce was ever granted and restraining order issued in 1894 was dismissed in 1917.13 Uriah and Arminda's divorce indicates that, in addition to the four children children listed, there were at least two others born during their marriage. From the records at River Bend cemetery, it appears that they were either born dead or died before they were given names.14 Uriah may or may not have married Olive E. De Mander Griswald, the daughter of Lewis and Margaret Demander after 1894 at Kent County, Michigan. Olive was the woman that Armanda, in her request for a divorce, accused him of having adultery with; There does not appear to be a record of this marriage , how ever, she is listed as Uriah's wife on the 1900 U.S. Census and listed as wife on her burial information.11 Uriah and Olive appeared on the census of 16 June 1900 in Kent County; By 1900, Uriah had given up farming and his occupation was listed as a lumber inspector.11 After Olive died in 1904, Uriah may have split time between his two daughters, Maggie (in Alabama or Detroit Michigan) and Jessie (in Chicago). While he can not be found in 1910, he was listed in the census of daughter Jessie I. Pratt on 7 January 1920 at Chicago, Cook County, Illinois. Grandson Norman Pratt remembered visiting him at his aunt Jessie's; Mary Larrik (29) and Frank Shaddel (27) were also rooming with Jessie.15 Uriah died on 17 May 1926 at 1223 E 53rd St., Chicago, Cook County, Illinois, at age 79; Death was from Arterial Sclerosis certified by Andrew J Brislen, M.D. including a note that "The Body removed to Grand Rapids, Michigan for Burial". Uriah was probably buried in an unmarked grave at the Riverbend Cemetery in Walker, Kent County, Michigan.16,17

Children of Daniel B Nichols and Ellen A Eddy

Children of Harriet A Norman and James P. Lawson

Children of Joseph A. Crook and Martha "Mattie" A. Cawthorne

Children of Martha A. Gunter and John W. Childres

Child of Zion Frazier and Roda A (?)

Child of John A Smith and Mary Samantha Hall