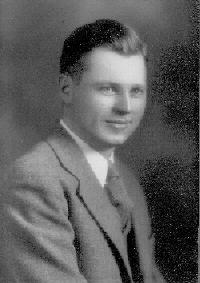 Norman Uriah Pratt (ca 1930)
Norman Uriah Pratt was born on 2 July 1903 at Belvidere, Boone County, Illinois.4 He was the son of William Joseph Pratt and Amalie "Mollie" Auguste Albrecht.2,3 He was listed in the Household of his parents, Bill and Mollie on 17 April 1910 at Belvidere, Boone County, Illinois.1 Sadly, his father, William Pratt, died of a burst appendix on 23 February 1918 at Belvidere; Bill suffered for a long time with intestinal problems which were probably related to appendicitis. He died of peritonitis (listed on his death certificate as a septic infection) resulting from a burst appendix. From and obituary Sunday, February 24, 1918 "survive one daughter, Hazel, three sons, William R., Norman and Fred, all of Belvidere, his father, Uriah Pratt of Detroit and two sisters, Miss J. Pratt of Chicago and Mrs. C Montross of Detroit. The deceased has lived in Belvidere eighteen years, and was a well known and respected citizen.5,6,7" Norm, was a 16 year old student and Janitor at a Photography Studio, when was listed in the census of his widowed mother in the census of on 5 January 1920 at Belvidere.8 After recieving a ROTC scolarship to Stanford University, he and his mother left Illinois for the Bay area at California.9 After receiving a ROTC scholarship to attend Stanford University in Palo Alto, California, Norm and his mother traveled west in 1925. There, he attended Stanford between September 1925 and June 1929.10 Norm graduated in June 1929 with a BA degree in Business and Economics. After graduating from Standord Norm recieved an appointment as Second Lieutenant of Filed Artillery in U.S. Army Reserve on 20 December 1929. He would later receive a teachers deferment at the beginning of World War Two.11 After graduation, he went to work for PriceWaterhouse (now PricewaterhouseCoopers) where he worked as an estate auditor.. While working there, he appeared on the census of 3 April 1930 in 1538 Filbert Street, San Francisco, San Francisco County, California.12 After graduating from Stanford, Norm After working as as an accountant for a while, he realized that he was not suited for a corporate life and he returned to Stanford eventually earning a lifetime Teachers credential before the beginning of WWII. He then taught business related courses at San Jose City College and Abraham Lincoln High School in San Jose, California. As a teacher, he felt that his greatest achievement was that although he gave a number of incompletes, he never failed a student and all of the incompletes were later made up by the students who received them. Norm then became comptroller of the large San Jose Unified School District. He retirement from the shcool district at the end of June in 1963. After retirement he worked as a bookkeeper for a wine tasting business and sold real estate in Vacaville, California. Norm had married Marion Rebecca Burke, daughter of Harry Eugene Burke Sr. and Marion Josephine Armstrong, on 19 November 1932 at Palo Alto, California; They were married in the home of Marions Father, H.E. Burke.13 Norm and his family after moving into an apartment in the home of Marion's father were included in the census of, Harry Eugene Burke Sr. and Marion Josephine Armstrong, on 3 May 1940 at Redwood Township (Los Gatos), California.14      Norm and Dr. Alfred Lester Coester had a closed personal relationship. Alfred was a professor of Spanish American Literature at Stanford University. Norm had worked for and lived in Alfie's Chauffer'ss.dak. apartment while attending Stanford, University and Alfred treated Norm almost as a son. After the death of Alfred's second wife, Alfred was a common sight in the Burke-Pratt household sharing many Sunday dinners with the Pratt's. When Norms son's, Paul and David, became tired of Alfies stories, they would come up with a reason to leave the table as fast as possible. It was not long before Alfred fondly began to refer to them as the gobble and get boys! After Alfred's retirement from Stanford, the Pratt's, at Alfred's expense, built a cottage on their property at Wanda Lane for Alfred to live in for the remainder of his life. at Palo Alto, California.9 Like his grandfather, Carl Albrecht, Norm had bright red hair. He was noted for his generosity would literally give the shirt off his back if he thought the person was in need. There were times when that part of his character would irritate the rest of his family, especialyl when he also gave away their things.15 On a trip to visit his son Paul , Norman Uriah Pratt died on 5 May 1985 at Martinez, Solano County, California, at age 81; His death was due to Cornary Thrombosis.16 Boris and Jean Small met Norman and Marion Pratt during the mid 1930's. They became fast friends for the remainder of their lives. They traveled together, camped together and spent countless hours dinning and dicussing their families. In the early 1980's, Jean and Marion took a extended tour of England together. In turn, Boris would drag Norm fishing when ever he could. Some of their fishing trips were the stuff ledgens are made of; Over the remainder of Norm's life, some of the fishing trips he and Boris made were the stuff ledgenends are made of.17

Children of Charlie Marion Weigart and Emma May Swimmer

F
Ruth Luck is the daughter of James Luck and Sarah Catherine Woolfenden.2,3

Child of Theodosia A. Ramsey and Lloyd Francis Harbour

Child of Kathryn B. (?) and William C. Armstrong Jr.

Children of Vola May McAlexander and Henry H. "Dewey" Hayhurst

Child of Frances (?) and Lee Schweigert

Child of Wallace B Salmon and Marie Charlotte Crumley

M
Hudson McNeil is the son of Willie McNeil.2

F
Margaret Dunford is the daughter of John D. Dunford and Sarah B. (?)2

Child of Lloyd Francis Harbour and Theodosia A. Ramsey

M, b. 5 October 1904, d. 9 November 1970
Charles Taulman was born on 5 October 1904 at Missouri.1,2 He appeared on the census of 21 April 1930 in Los Angeles, Los Angeles County, California.2 He married Truby Louise Goelitz, daughter of Frank L. Goelitz and Augusta Albrecht, on 8 June 1931 at California.1 Charles and Truby Taulman appeared on the census of 9 April 1940 in Inglewood, Los Angeles County, California.3 Charles Taulman died on 9 November 1970 at Eureka, Humboldt County, California, at age 66; From Charles' obituary (10 Nov 1970 Eureka newspaper) "Former owner and operator of the Ishi Pishi tavern at Orleans."1,4,5

Children of Rose Ellen Forth and Harry Sands