Children of George A Smith and James Allen Turner

Child of Laura Josephine Darby and Cornelius B. Havens

JULE GUNTER died this morning at Chickasha, Oklahoma where the funeral will be held Sunday. Mr. Gunter was a resident of Cooke County for many years and was a big breeder of registered Hereford cattle at the time he lived here. He raised some of the finest cattle in the United States. His farm was located several miles southwest of here. He is survived by his wife, son NAT and daughters, Mrs. ADRIAN MELTON of Chickasha and Mrs. IRA JOHNSON of Minco, Okla. He was a half brother of HORACE and SAM GUNTER and Mrs. R. M. FIELD of Gainesville.10 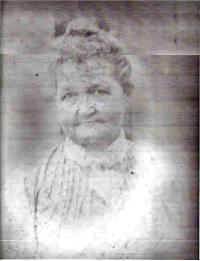 Arminda Coon Pratt - (provided by Deb. Gowen)
Arminda Coon was born on 15 June 1851 at Lima, Ohio.5,3,6,7 She was the daughter of Tobias M Coon and Eleanor "Ellen" Decoursey.3,4 Arminda Coon was included in the census of her parents, Tobias M Coon and Eleanor "Ellen" Decoursey, on 3 July 1860 at Shawnee, Allen County, Ohio.8 She was recorded in the homer of her parents for the census of on 16 June 1870 at Jamestown, Ottawa County, Michigan.3 By september of 1870, Arminda had left her parents home and was working for Geroge S. Toby at his saw mill appearing as a servent on the census of Toby's mill of 13 September 1870 in Byron, Kent County, Michigan.9 Aminda married Uriah Hitite Pratt, son of William Pratt and Emma Pepper, on 18 May 1882 at Talmadge, Ottawa County, Michigan. Some 5 years after the birth of her daughter, Pruella; They were married by Chauncey Baldwin, Justice of the Peace.10,11,12,13 Arminda was Uriah Pratt's second wife and while she had at least one child (Pearl) before she married Uriah, it appears that this was Arminda's first marriage.14
While they manage to produced at least 6 children in just over ten years, their marriage must have been a tumultuous one for Arminda filed for divorced on 18 September 1893 at Kent County, Michigan, citing drunkeness, assault, cruelty and adultery with an Olive Griswold (later to become Uriah third wife). Uriah countered on much the same grounds, citing assault, disgusting living habits and teaching their children to chew and smoke tobacco. There seems to be no evidence that their divorce was ever granted and a restraining order issued in 1894 was dismissed in 1917.13
Arminda Coon was included in the census of John Slager and Pearl "Pruella" Coon in 1894 at Walker Township, Kent County.15 She was also living with Pearl and John for the census of on 21 June 1900 at Cannon, Kent County, Michigan.16 Armnda was recorded in the census of her son, Ralph Otis Pratt, on 3 May 1910 at Maple River, Emmet County, Michigan; Living with him were his mother Arminda and brother Melvin. He was working at various odd jobs related to the timber industry.5
She died on 5 April 1911 at McKinley, Emmet County, Michigan, at age 59; Lists her father as Tobias M. Coon, mother as Eleanor Dicoursey. Death due to Chronic Nephortes. Her death certificate lists Arminda age at death as 51 years, 9 months, 21 day's which would make the birth year 1859. The 30 July 1860 census lists the age of Arminda and her twin as 8 years old. She is clearly 19 on 16th of June in 1870 census. She obviously went to Michigan in the summer of 1870 for she appears on the census of 13 Sepetember at the George Toby saw mill in Byron, Michigan. Again, her age is 19 on that entry. So, while the months and days may be correct, the year was either coppied incorrectly or she lied about her age. Clearly she was closer to 59 than 51 at the time of her death.17,7,4

Child of Arminda Coon and (?) Cridler

Children of Adelia Libhart and Benjamin B Bacon 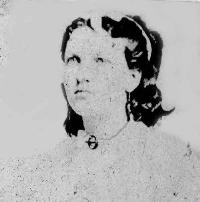 Mary Ann Brown Pratt as croped from wedding photo
Mary Ann Brown was born between 4 July 1851 and 3 July 1852 at Huron, Wayne County, New York; Where was Mary Ann actually born? A transcribed marriage return of Uriah and Mary Ann which gave her age as 18 and said that she was born in Glascor, New York. In the 1900 census of her son William Pratt he said his mother was born in England. His (William's) birth certificate indicates that Mary Ann was born in Michigan. Mary Ann's parents are listed on the 1850 census for Huron, Wayne County, New York. A Glascow street runs through the town of Clyde in Wayne County ( the Pratts first knowen U.S. location ). It then runs north to the town of Huron, Wayne Couty. Could it be that the Glascor given as the location of her birth on her marriage certificate was actually the Glascow street in Huron, Wayne County? This author thinks so and lists Huron as her birth location.3,4,5 She was the daughter of Joseph F. Brown and Mary A. Hare.1,2 Mary Ann Brown was listed in the census of her parents, Joseph F. Brown and Mary A. Hare, on 8 June 1860 at Georgetown, Ottawa County, Michigan.1 She was also listed in the census of her parents on 22 June 1870 at Georgetown, Ottawa County.6 Mary Ann married Uriah Hitite Pratt, son of William Pratt and Emma Pepper, on 3 July 1870 at George Town, Michigan; Their marriage was witnessed by Mary's next door neighbor's, Oscar and Naomi Lowing. J.R. Mergridge was the Justice of the Peace who married them.2,7 She was listed in the deed of inheritance made by Emma Pepper to her living children on 20 April 1880 at Kent County, Michigan.8 Mary Ann Brown died on 18 May 1880 at Walker Township, Kent County, Michigan; Cause of death, Consumption.9 She was buried after 18 May 1880 at Lot No. 31, Riverbend Cemetary, Kent County, Michigan.10 On Emma Pepper's deed of trust, Mary Ann signed her name with an X which would indicate that she could neither read nor write.8

Children of James A. Ellis and Albertine G. Cross

F, b. 19 September 1851, d. 17 April 1924
Julia Sophia Sorensen was also known as Julie Sophie Corneliusen.2,3 She was born on 19 September 1851 at Norway.4 She was the daughter of Cornelius Sorensen and Karen Olsdatter.1 Julia Sophia Sorensen married Johann "John" David Wurschmidt, son of Gottfried Wurschmidt and Burgithe Anne (?), on 15 July 1870 at Milwaukee, Wisconsin.2,5,1 Julia Sophia Sorensen appeared on the census of 11 June 1900 in Chicago, Cook County, Illinois; Julia is listed as a widow on the 1900 U.S. Census while John joines her on the census of 1910.6 She and Johann "John" David Wurschmidt appeared on the census of 21 April 1910 in Chicago, Cook County, Illinois.5 She died on 17 April 1924 at Butte County, California, at age 72.4

Children of Albertine G. Cross and James A. Ellis 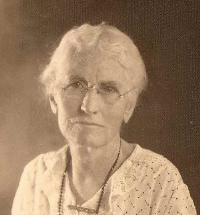 Children of Caltha A. White and Elmore Yokum Willis

M, b. 21 December 1851, d. 26 May 1912
John Martin Meeker John was a school teacher in the families home town in Putnam County, Missouri. He divorced his first wife and was remarried in 1885 to Cynthia.1 He was born on 21 December 1851 at Lockridge, Jefferson County, Iowa.1 He was the son of Nelson Joshua Meeker and Etna Wyatt.1 John Martin Meeker died on 26 May 1912 at Benton County, Arkansas, at age 60; Burial: Springtown Cemetery, Springtown, Benton County, Arkansas.1

M, b. circa 1852
Josiah Coppernoll was born circa 1852 at Fort Plains, New York.1 He married Elizabeth "Eliza" Quick, daughter of Joseph Quick and Elizabeth Blanche Welsh, on 23 May 1887 at Kalamazoo, Michigan.1

Children of Anna Harms and Peter B. Unruh

M, b. circa 1852, d. before 1875
James Walker was born circa 1852 at Tennessee.2 He was the son of John B. Walker and Mary (?)2 James Walker appeared with his Parents, John and Mary Walker, on the census of 9 July 1860 in Smithville P.O., DeKalb County, Tennessee; This census included Francis Bowles (b 1777), perhaps James' maternal grand-mother?2 He married Surilda Jane Cotton, daughter of John M Cotton and Mary (?), circa 1869 at Tennessee.1 James Walker and Surilda Jane Cotton appeared on the census of 18 August 1870 in Smithville P.O., DeKalb County, Tennessee.3 James Walker died before 1875.1

Children of James McCrary and Dixy A Welborne